As you know Sunday is Father’s Day, I am always at a bit of a loss as to what to get my Dad. I am passed the time when I could get away with getting him a tie, pair of socks or some golfing equipment. So as usual I was thinking about what I would like to do, rather than the task in hand – finding the perfect present. 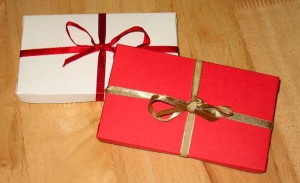 Father's Day Presents all wrapped up

Thankfully they came together somewhere in the middle when I remembered a post from A Wee Bit of Cooking on Scottish Tablet. My Dad loves Tablet, and I want a new recipe to try.

Tablet is one of those wonderfully Scottish things, that probably would never been invented anywhere else, and is certainly not for someone who is watching their waistline! The ingredients are simple: sugar, butter, condensed milk, milk and vanilla essence, the method time consuming and easy to get wrong.

My Mum used to make it for special occasions when we were growing up, and I always remember the smell and how good licking the spoon is. The recipe from A Wee Bit of Cooking I don’t think is the same one my Mum used, and I’ll need to get that one from her next time I go back home, but it was good all the same.

Since I was making this as a gift I decided not to do the swap from butter to coconut oil, and also because getting tablet right is so notoriously difficult I wanted to put things in my favour as much as possible. (I had no room for error, as I had run out of Caster Sugar the night I need to make it). I did however cut down the quantities from the recipe (to roughly 1/4), mainly because there is only so much I can send through the post, and since I am, sort of sometimes, looking after my own waistline. I didn’t want a 3 month supply sitting around in my kitchen.

One other slightly quirky thing is I made my tablet not in a square tin, but a muffin tin. This was largely because at the quantities above I would need a fairly small tin, and also knowing the problems you can have when cutting tablet, I opted for putting my tablet in a muffin tin (each round about 1/2 inch thick) which with the above quantities made 6 round tablet pieces. 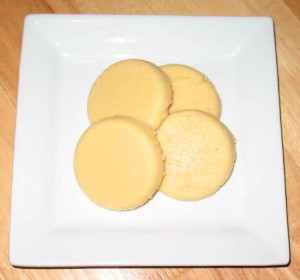 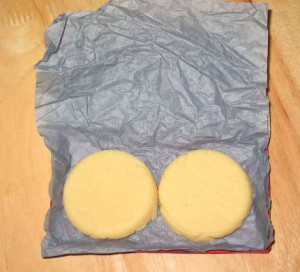 Two Tablet Rounds in the box

If you want to see how I made the cute boxes then read How to make a gift box from an old greeting card, although I didn’t use an old card to make these boxes. Thought that for a gift containing food people would rather having clean unused card!

What to do with Broad Beans