The number of times I have made really bad beef stir fry has meant that now I have actually made a really good one I feel the need to post the recipe! However this time I did it a bit differently, and it was worth it.

From now on I think I’ll try to stick to these rules as much as possible, although maybe I’ll try downgrading the cut of beef, the fillet was perfect but really can only afford it for special occasions. 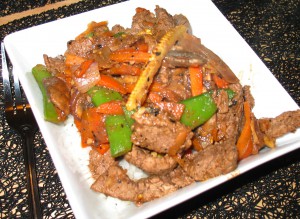 This recipe was loosely based off of the recipe for “Beef and Mangetout Stir-fry” and is taken from this book Cook’s Library: Low Fat.