In Cakes and Desserts, Coffee, Muffins

The problem is that recipes for Coffee Flavoured Muffins, not recipes for muffins to have alongside a cup of coffee, are few and far between. While on initial glance it might seem that there are quite a few recipes, 90% of the ones that do exist are actually exactly the same recipe.

The recipe below does contain coffee, and unlike the first of couple of recipes I tried is really really good. 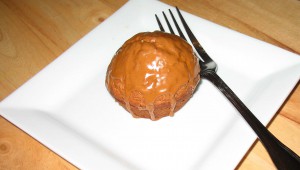 
I hinted in my previous post that I had once had a major disaster in making Coffee Muffins. They were and hopefully will always be the most disgusting things I have ever made. Most recipes that have coffee in them use instant granules, however the recipe I was using didn’t mention anything about mixing those granules in water, while this surprised me, I carried on, assuming that while cooking they would dissolve into the Muffin batter.

They did not. So as you ate one the coffee granules dissolved on your tongue which is a singularly disgusting experience, added to that an accidental doubling of nutmeg, made for a muffins recipe that was very special.

I am glad to say that the following recipe was infinitely superior. It is modified from this recipe on allrecipes.

Heat oven to 210’c, grease a muffin tray. In a bowl, beat coconut oil or butter into castor sugar until pale and fluffy. Then add your egg and continue to beat.

Add baking powder to the plain flour and fold into the butter mixture. Dissolve the coffee granules in the hot water, add to the milk and mix into the mixture. Don’t worry if the you don’t manage to mix the coffee in all the way through, mine had a lovely marbled affect when you cut them open. Spoon mix into muffin tin.

Bake for 25 – 30 minutes , or until golden brown and a toothpick inserted into the center comes out clean. Allow to cool before removing from the tray.

Add the 2 tsp of coffee granules to the second lot of 10ml of boiling water and make sure the coffee is dissolved. Sieve into a bowl the Icing sugar, mix in the coffee and Vanilla Essence. Stir until all combined, and put unto the top of the muffins. 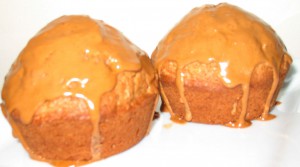