A couple of weeks ago I was given a copy of Good Housekeeping: Great Baking (the fiancee was worried I wasn’t creating enough cakes, cookies and such) and since then I have been leafing through it’s 600 recipes whenever I get the chance. Again it’s another American cookbook so the conversions are annoying but at least there is a table at the back. 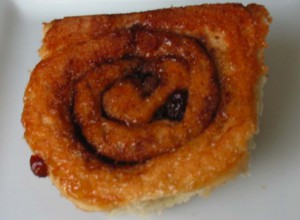 I have been looking mainly at the cakes, but have always fallen short – mainly because I have no circular cake tins!! This is something that has to be rectified soon but since the weather was so bad this weekend in Edinburgh I decided not to risk the extra trip out to find me some 9″ cake tins.

Thankfully I do have a square cake tin so many of the recipes in the book were still open to me. Eventually I decided on Cinnamon Buns as it would be a wonderful Sunday morning treat, the fiancee really loves Cinnamon and cooking bread from scratch was totally new to me.

In the past the thought of using dried yeast scared me, I don’t remember when or where the feelings came from, but I was sure doing it from scratch was fraught with dangers, that my bread wouldn’t rise, that it wouldn’t hold together, that I was in all probability heading to my second major all out kitchen disaster (the first being the eponymous Coffee Muffins).

With only one false start my Cinnamon Buns turned out amazingly fluffy and light, while I was a little bit disappointed in the cinnamon-i-ness of the bread, it did taste very very good.

It is a fairly drawn out process, you need to start the night before you wish to eat your buns and leave them 12 hours in the fridge overnight.

This recipe as mentioned above comes from Good Housekeeping: Great Baking the only changes I have made was the replacement of coconut oil instead of butter (using the 3/4 rule) and that next time I would add at least 2 tsps of cinnamon to the dough mixture.

Putting it all together 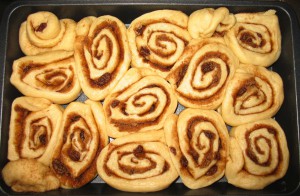 Cinnamon Buns in tray before they go into the fridge. 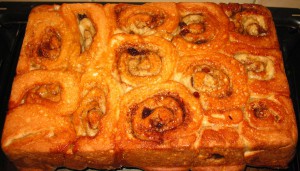 Cinnamon Buns straight from over, yum!

I had number of these buns the morning I made them (Sunday) and then had one warmed up in the evening with plain vanilla ice-cream which was beautiful. I put around half of my buns in the freezer, supposedly 15-20 minutes in a preheated oven of 180 will do the trick to reheat them.

How To: Cooking for the In-Laws