In Cakes and Desserts

It’s that time of the month again, where I realise that although I did my Daring Bakers Challenge weeks ago, I need to dig out the pictures and dredge the bottom of my memory to make some sort of intelligent comment.

The August 2009 Daring Bakers’ challenge was hosted by Angela of A Spoonful of Sugar and Lorraine of Not Quite Nigella. They chose the spectacular Dobos Torte based on a recipe from Rick Rodgers’ cookbook Kaffeehaus: Exquisite Desserts from the Classic Caffés of Vienna, Budapest, and Prague.

The basic idea of a dobos torte is to layer thin layers of sponge with chocolate buttercream and top with caramel coated sponge. Most of the ones I have seen are circular and have between 6 and 8 layers of sponge. So to be different (but not all that different in the end) I made a rectangular one of around 2″ by 6″, which made enough for about 4 people.

I may have mentioned previously that I don’t really like buttercream. So the idea of a cake that is thin layers of sponge stuck together and then entirely coated with buttercream is not my idea of heaven.

I am still not sure what it is about buttercream that I don’t like, so I tried two different ways of producing a Dobos to my liking. Firstly what do you call a buttercream where you don’t add the butter?

Missing out this stage seemed to have some added benefits, I felt less guilty about just how bad the torte was for me, but more importantly while some were tweeting that their buttercream wouldn’t set mine was almost solid, like Nutella, maybe somewhere in the middle would be best for next time!

Secondly, remember last Daring Bakers I mentioned they should be more seasonal? To try and put a more summery slant on my torte and more importantly to make it less buttercreamy – I used Cherry Jam to stick my layers together. Then the (butter)cream to coat the outside of the torte. 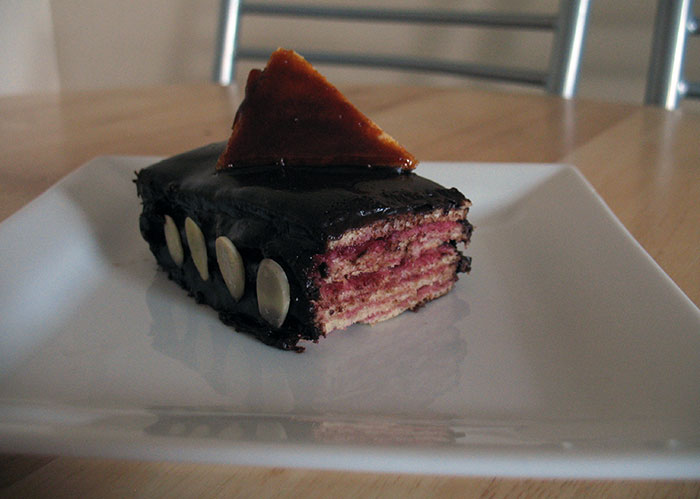 See the pretty pink filling between the thin sponge layers!

I think this worked out for the best for me. Dark Chocolate and Cherries go wonderfully well together, and neither the jam or the chocolate was too overpowering. Admittedly I feel a little ashamed about buying the jam from Tesco. The original plan for this months Daring Bakers is that I would need several attempts, so I could use the store-bought jam the first time when it didn’t matter.

However my first attempt wasn’t a disaster, and in the end I ran out of time, I also had plans for a raspberry and white chocolate torte – which I think would have been out of this world.

All directions and measurements come from Not Quite Nigella‘s challenge post, with only small changes from me.

Directions for the sponge layers:

NB. The sponge layers can be prepared in advance and stored interleaved with parchment and well-wrapped in the fridge overnight.

I quartered this recipe (as I was only making enough for the outside of my much smaller torte).

Directions for the chocolate (butter)cream:

NB. This can be prepared in advance and kept chilled until required.

Directions for the caramel topping:

Now that you have all the parts of your dobos you need to put it together! 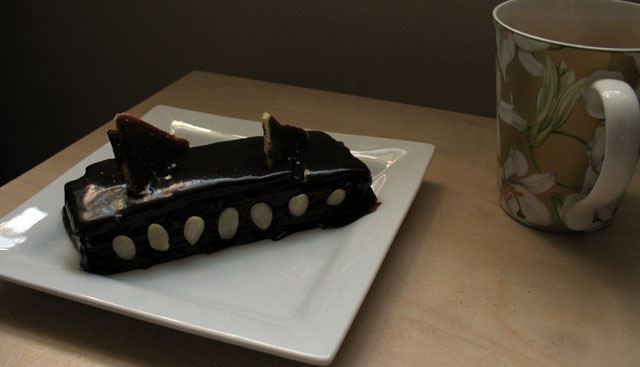 This Torte tasted amazing, and really made competing in the Daring Bakers worth while. It was difficult without being too time-consuming. There were lots of different stages, but they didn’t need to all be done in one day. All in all I would say this challenge was a success, and I am definitely in with the Daring Bakers for a while longer. In fact I even signed up for Daring Cooks… so watch this space!