This week when I peaked inside my organic box and saw another bag of chard I groaned. It’s that small feeling of disappointment knowing of all the vegetables in the world – they keep sending me this. I could just ask them to never send me it again, but that feels like giving up. Admitting that this green and rainbow coloured leafy vegetable has defeated me.

It’s not that the vegetable doesn’t look pretty, it does, its pink, yellow and red stems look beautiful on a plate but it tastes metallic and bitter. Usually I sauté it and have it as a side, but in my vain attempts to make it taste better I over cook it and it becomes a green goo. But oh no, not this time. 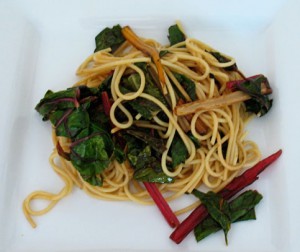 The key to making good chard is to know that the stalks and the leaves take different times to cook. I ended up with green gunk because the stalks took so long to cook that the leaves were way overdone.

This time I remove the stalks and cooked them separately in a little oil and garlic, until they were just starting to caramelise.

Add the chard stalks, oil and garlic to a frying pan, and cook under a high heat until they are just starting to caramelise. 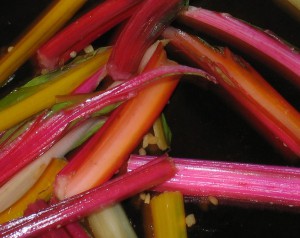 Then I added the leaves in, and some lemon juice 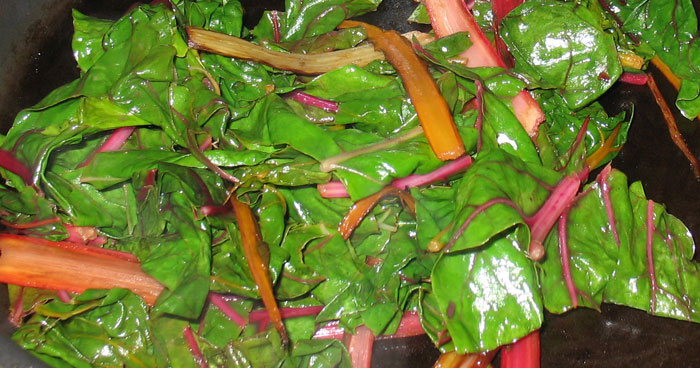 I cooked it like this for under five minutes, tasting the chard along the way. When it stops tasting too bitter I added some cooked spaghetti, olive oil, a pinch of salt and some black pepper. 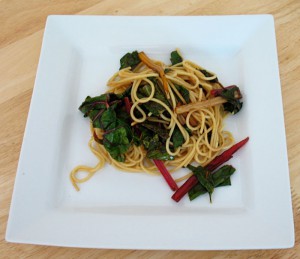 This is by far the best way to cook chard that I have come across. (Plus it got the seal of approval from The Other Half – which after the rest of this weekend is saying something!!)

Funnily enough now we are both looking forward to the next time I get it in my vegetable box!

It is a truth universally acknowledged…