What to do with Broad Beans

This week in my Organic Vegetable box I got 14 Broad Bean pods. The suggestion in the box was Crushed Broad Beans and Mint Bruschetta but I opted for Broad Bean and Bacon Risotto instead. 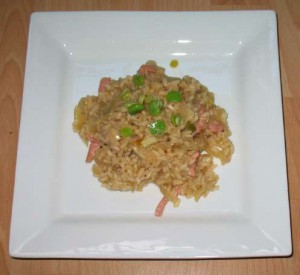 I love risotto, and it was quite different from the sort I usually make. (Usually with chicken, saffron and mushrooms). It was lovely, although I used smoked bacon and I think that alongside the stock cube made it a little bit on the salty side.

This was the first time I had cooked with Broad Beans before and I found it a little disappointing. For such a huge amount of veg, I got such little return. The recipe states your broad beans should be double podded, which I found out how to do here. Which basically means to remove the beans from the pod, quickly cook then remove the outer skin of the bean. Where you are left with a even tinier green bean.

In the recipe I used it said you should start off with around 2kg of broad bean pods for four people, I probably had around 400g so nowhere near enough from my Veg Box alone. We made do and those that we did have were very nice.

My general feeling about Broad Beans, if I get more in my box I’ll use them but I am not sure I would go into the supermarket and buy them. If you know of anything to do with the pods, then please drop me a comment. I’d love to feel less wasteful.