As I may have said before, the other half loves rice, he will infinitely prefer rice with his chinese to noodles (which is a shame as noodles are so much quicker to prepare). Risotto is one of our favourites meals, lots of rice and I can use whatever vegetables we have. But I get bored easily, I like a bit of a change, the idea of using pearl barley rather than rice, appeals because it’s a much more traditional Scottish ingredient 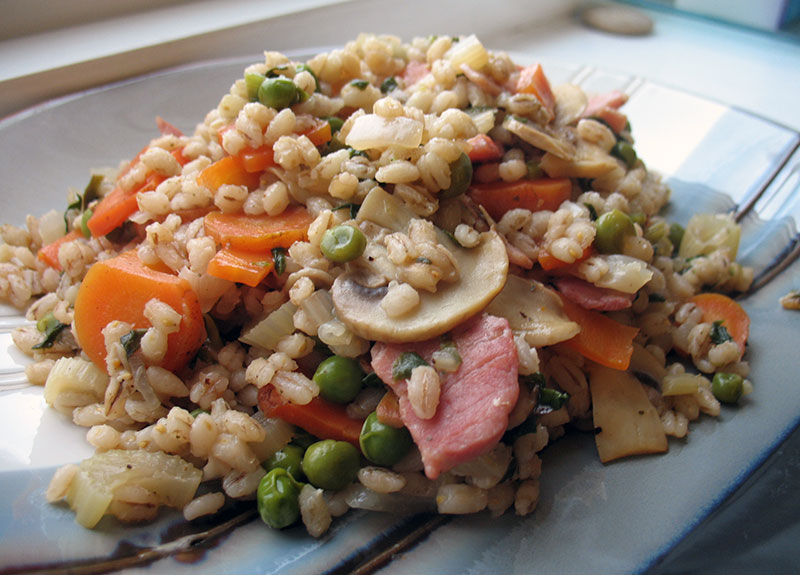 From doing a bit of research there isn’t really any difference between recipes for orzotto and risotto other than the change of main ingredient. The main difference is that barley takes longer to cook.

What follows isn’t really a recipe, it’s a baseline, throw in what you have to hand and what you love the most. I love adding chicken, bacon, mushrooms, bell peppers and peas.

A basic recipe for a Orzotto – a pearl barley risotto – change to use what meats and vegetables you have to hand.

Because the pearl barley takes so long to cook, and I was in a rush, I cooked the ingredients slightly out of order to give the barley the longest possible amount of time. Normally you would cook up all the ingredients till they are mostly cooked then add the barley and stock, leaving to simmer for around 50 minutes. Feel free to use this method if you have the extra time, as it would probably make the resulting dish more flavourful.

Add the onions, celery and carrots into a large pan under a medium heat with a lid (I used a Cast Iron Le Creuset Casserole dish), and a little bit of oil. Cook for a couple of minutes then add the pearl barley, and cook for another 2 minutes. Stirring occasionally so it doesn’t stick.

Now add the white wine, and stir quickly to losen any vegetables or barley stuck to the bottom. Once the wine has evaporated, pour in your stock. This is a departure from the normal way to cook risotto rice, but in fact makes it easier on us, less stirring, less keeping an eye on the pot. Add the lid and leave to simmer.

In the meantime using a frying pan under a high heat, add the sliced bacon rashers, mushrooms and frozen peas. Keep cooking until the bacon is starting to cook through and the peas are no longer frozen. Add the cooked vegetables to the barley, and take this chance to give it a stir. If need be add more water if it is starting to look dry. Replace the lid and leave it cooking until the barley has had the full 50 minutes. (Although do check every so often that it is not drying out of sticking, I lost about a quarter of the recipe on the bottom of the pan…)

To check it’s ready I use the very technical method of just eating a bit of the barley, if it is still a bit crunchy then I replace the lid adding a bit more water if necessary and try again in another 5 minutes. If not it’s ready.

If when your barley is ready it’s still a bit liquidy then remove the lid and give it a couple of minutes to evaporate the extra water.

Serve with black pepper, and if you fancy a grating of parmesan cheese.

I was worried that the barley might give a strong flavour to the dish, but it didn’t, the flavour was just the same as if i had used the same recipe for a risotto. We both loved the change of using pearl barley, and I will definitely be using pearl barley as a substitute to rice in more dishes. (I spotted this great looking spring barley dish over at the guardian this morning, that sounds worth a try).